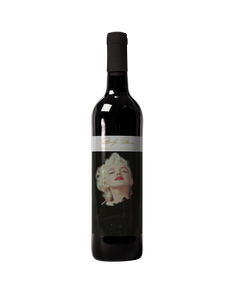 Winemaker’s tasting note:
This wine immediately impresses with rich dark purple, garnet color.  The aromas stand out with their nice intensity and wonderful complexity.  Dark fruit and ripe raspberries are enhanced by hints of spice, cedar, caramel, and vanilla.  Wonderful presence on the palate speaks of a top Alexander Valley Cabernet, which are known for a wonderful balance between well structured Cabernet body and grip, with tannins, more than enough for aging, but still restrained to allow for immediate consumption.  This wine’s color and rich silky feel on the palate is enhanced by blending with 19% Malbec.

Appellation:
We are excited to release our second wine from Alexander Valley, Sonoma County.   This appellation is known for producing some of the best Cabernet Sauvignon in California.

Story behind the wine label:
Photos taken in February 1955 — Milton Greene captured this photograph as he tested lighting for a shoot he was going to do the next day and used Monroe as a model. She is wearing a cape that had been left over from a fashion shoot Greene had done earlier that day.   Marilyn had just learned that a lawsuit had been settled with the movie company she was suing so she was ready for anything Milton wanted her to do.  She added the bright red lipstick!  And she lived every day in the present. This image was called Black Cape Sitting.