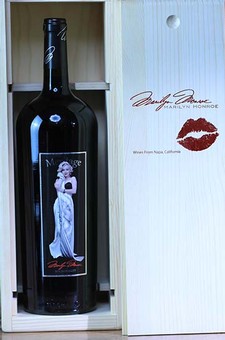 For the label, in 1953, Milton Greene was sent to Los Angeles on assignment for Look Magazine to photograph a budding actress named Marilyn Monroe. The Evening Dress Sitting depicting Marilyn, in an evening wear and mink stole was one of six sittings photographed that first meeting. To Marilyn's surprise, she realized that day that color photography's wonder boy was in fact just a boy to which Milton replied you're just a girl. That small gesture of recognition laid a foundation for their enduring friendship. This photograph captures a certain innocence in Marilyn that has drawn in people for generations. We have created a silver encasing around the label photograph.

Winemaker Notes:
The rich garnet-ruby hues and the complexity of aromas in this wine
immediately speak for the strength of another wonderful harvest in 2016. In
the nose, one is attracted by smells of dark cherries, floral notes, toee, and a
pleasing smoky earthiness and bright bramble character. The lush round entry
on the palate leads to a well structured, full mouthfeel as one would expect in
a top Bordeaux blend. Added notes of currants with a hint of spice make this
Meritage a wine that is immediately enjoyable but that will reward the patient
consumer with the added complexity that will be gained with 5 to 10 years of
aging.

The Vintage:
One of the better years in the last 10. No rain from late spring until well after we
were finished picking, hence no need to pick early for fear of rain or to let hang
for flavor as both sugar and maturity were reached easily. Moderate
temperatures throughout with only a few heat spikes during the growing
season.

Pairing:
Meritage blends are some of the most complex and layered wine available. Try
pairing it with grilled beef, braised short ribs, or even a mushroom pizza.